Guest blog: A day in the life at Changing Climates 2022

Today we have a guest blog from Lucy, one of the brilliant young people we worked with for our annual physical theatre festival, Changing Climates 2022.

In June 2022, I went with North Leamington School to the Belgrade Theatre for Highly Sprung’s ‘Changing Climates’ festival. We were first introduced to the Highly Sprung artists and the Young Producers who had put this all together. 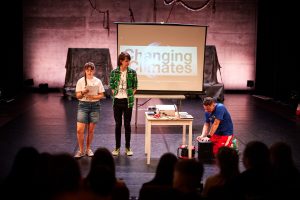 The first workshop I took part in was MOTH Theatre where we used recycled materials to create puppets. We were given a word relating to climate change; we were given deforestation. Using the techniques, we had learnt through MOTH Theatre, we successfully created a short performance to show the aftereffects of deforestation. We decided to focus on animals losing their habitats due to humans chopping down trees. After watching everyone else’s performances, it was interesting to see how similar the aftermath of each one was even thoguh we all had different words relating to climate change. 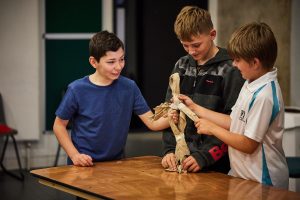 We then had the opportunity to watch a film created by Compliciate called ‘Can I Live?’. In this film, we followed Fehinti Balogun in his journey of fighting racism and climate change while asking the burning questions Can I Live?.  This piece was not only breath-taking and empowering, but also inspiring and helped me and others realise if we don’t do anything soon, there will be nothing we can do. Fehinti inspired me to start now and make a change no matter if how small or large.

Shortly after we took part in a Highly Sprung masterclass. We were each given a letter of the alphabet and had to come up with a movement that represented the letter, I was given the letter ‘X’. Once we had all created a movement one of the Highly Sprung artist would shout out a word and if your letter was in that word, you would go up and perform the movement you had created so all together it looked like a sequence of movements spelling out a word. It was a very creative task and allowed you to think outside the box when creating your movement. Then, we were put into groups of 6 and had to think of two words to create a sequence of movements for. My group chose the words ‘okay, bye’. We were told to make our movements sharp and powerful. They then put two groups facing each other to do a dance-battle-type game. Not only was this game creative but was also fun and competitive. 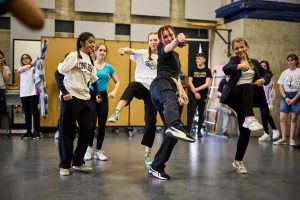 After, we went back into the theatre to meet Commonwealth Wheelchair Basketball player Siobhan Fitzpatrick. She spoke to us about having cerebral palsy and how nothing stopped her from completing her dreams. She told us how it wasn’t until she reached high school that she began being treated differently for her disability and how she refused to take no for an answer. She was able to compete in the 2020 Paralympics in Tokyo and has competed in other national and international competitions for women’s wheelchair basketball. I was incredibly inspired by her story and her perseverance to not give up. 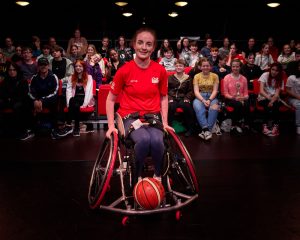 We were able to swiftly complete our tech rehersals before having dinner and then going into our real performance. Our performance was about an Afghan graffiti artist from Kabul; Shamsia Hassani. Her artwork is often about peace rather than war and promoting women’s voices. We used physical theatre to creatively demonstrate the affects her work has on other’s, empowering them to make a change. In multiple scenes we used coloured material to show the beauty of her artwork as well as using a lot of unison to show how we must all come together to make a change. 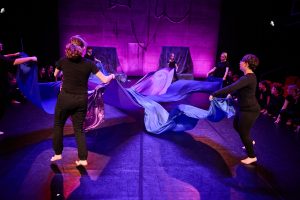 Next was the other school that was with us that day: Lyng Hall School. Their performance was about promising others to make a change to help the environment. It was inspiring and interesting, they showed how a small action of planting trees can go such a long way.

Finally, we were able to watch the Sprung Advance performance called ‘Silence Amplified’. In a world where oxygen must be mined for and the less fortunate are limited to 100 words a day, dreaming of what life was like above them, not having to worry about their word count. I was blown away by this performance, from the minute they all walked on stage I was captivated by the story. The four main best friends were amazing, and everyone’s acting was outstanding. Their physical theatre was incredible, and you could see how well they all trusted each other. The sound and lighting really brought it all together, adding intensity to scenes where I it nessessary. The whole performance was outstanding. 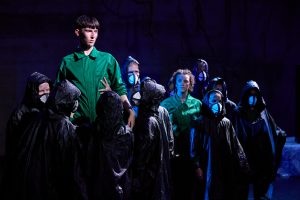 Overall, the experience was incredible and so inspiring. Highly Sprung creatively found a way to highlight the importance of climate change to young people, giving them access for ways they can help out.