Urban Astronaut: The Character of Hope
By Emily
28th January 2021

Urban Astronaut is set on a future Earth. Abandoned and uninhabitable, it has been destroyed by environmental pollution. A jaded Astronaut returns to Earth to scope out the possibility of life. On his journey, he meets a woman who gives him hope and shows him how the human race can act to avoid planetary destruction if it acts now.

The role of Hope in Urban Astronaut has been in a continual state of regrowth and change. Hope has been played by three different performers to date, and each have taken part in different stages of the character’s development.

The performance of Urban Astronaut in its first form centred the Astronaut’s journey. The visual spectacle of the Astronaut easily attracted audiences, drawn to witness a man transcend the confines of gravity above their high street or local park. The Astronaut’s voice follows his flight through the sky, as an audio log details the breakdown of earth’s atmosphere and his hopeless search for clean air.

However, a lesser anticipated story begins a short walk away. The story of Hope. 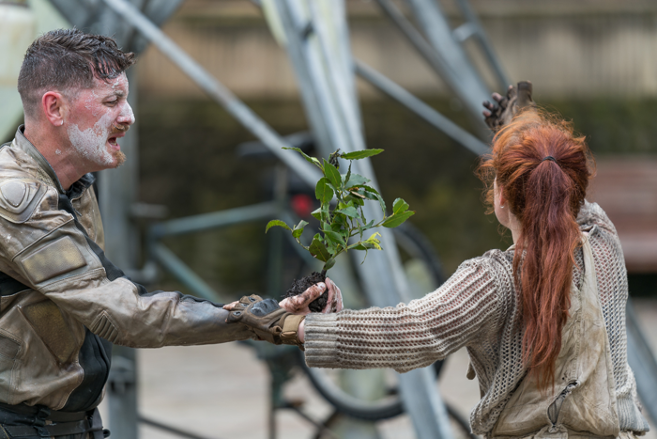 In its first imagining, the character of Hope was a metaphor, dancing in a dress made from clouds and blue skies. She entered the performance space carrying a case filled with soil and plants. Whilst the Astronaut made his journey towards her, Hope marked the boundaries of the performance area with a ring of soil whilst dancing, before the two meet.

After its first year of touring, Highly Sprung felt this prologue to the meeting of Hope and the Astronaut needed readdressing. Hope needed a role and her own story that clearly aligned with the important message of the show. The aim of restructuring the show was to get to know who Hope is, create a deeper intensity of the performance as a whole and create a more engaging visual narrative to bring audiences to Hope’s performance.

Hope’s story has become centred in strength, resilience and determination. Her performance now begins quite differently. She is a lone cultivator of life on a deserted earth, dedicating her days to proving nature’s power to overcome humanity’s carelessness.

As well as a new narrative for Hope, she gained a home; an aerial rig shaped like the base of a an electricity pylon (affectionately known as Polly). Similarly to how the Astronaut’s flying rig challenges traditional ideas about static aerial performance, Hope’s rig opened up opportunity for harness based aerial exploration and a unique visual language. She too gained an audio diary, telling of the rich fleeing a dying earth and leaving the poor and impoverished with the duty of saving the planet.

In the most current version of the show, Hope’s pylon rig is dressed with hanging plastic bottles filled with seedlings, bike wheels that have been reengineered to harness wind power and plastic containers collecting water from the top of the pylon. This is Hope’s home, she moves with ease around the rig, attached by a strop she leaps and hangs off the structure checking that everything is in working order. She invites children in the audience to guard precious young plants.

The audience meets Hope and they invest in her story and her mission. This investment creates a greater sense of jeopardy when the Astronaut and his crew begin to invade and destroy her space; children in the audience are often heard shouting at the crew to leave her alone.

Hope’s knowledge and confidence create a point of change for the Astronaut, she proves to him that the Earth isworth saving, and she has the evidence. 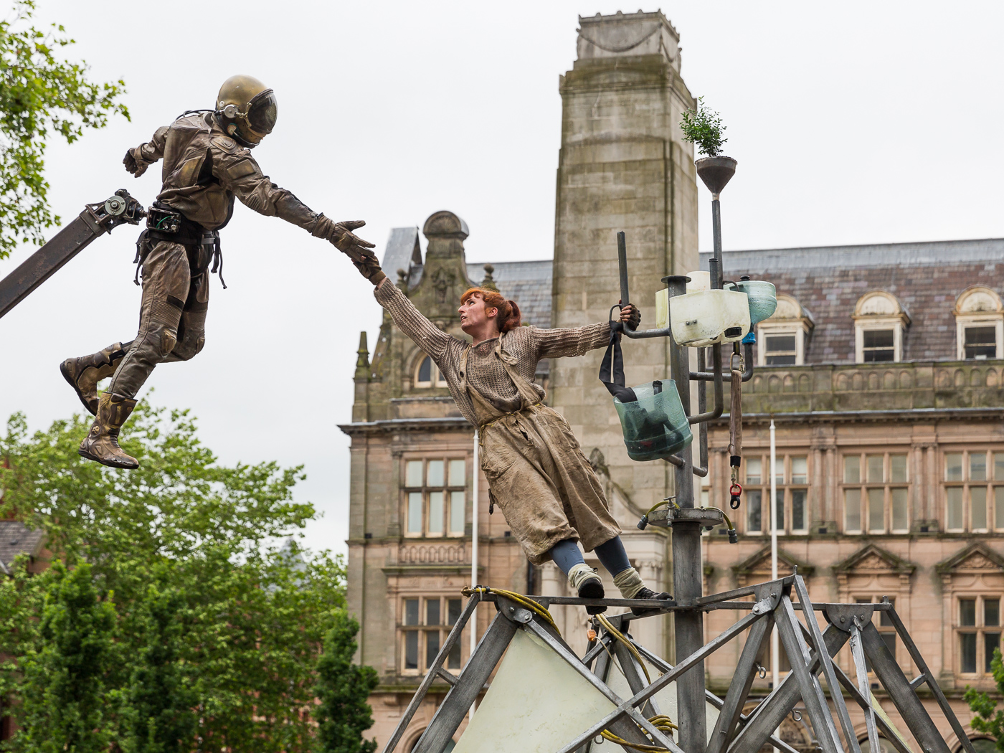 Teachers can now explore this outdoor spectacle with students through our new series of arts education packages: